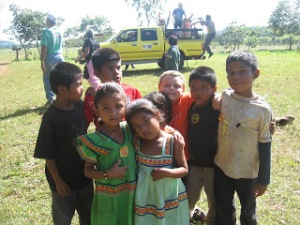 We had the opportunity to take Mac with us on our last trip to Panama. It was one of the coolest experiences that we have had as a family. The couple of weeks before the trip you could tell that he was getting nervous. He would ask a lot of questions about the people, food, what was he going to be doing, etc. It is not unusual for Mac to ask a lot of questions but when most of his questions are centered on one topic you know that things are stirring around in his head. I think that one of his biggest concerns was what he was going to eat. Half of his backpack was filled up with food and snacks just to be safe.

Mac did very well with the traveling. No matter how long or bumpy the flight he just keeps talking. Long bus rides were no problem either. He just fell asleep on who ever was beside him. The first night we slept in a hotel in Panama city. I got a little worried for Mac and the rest of the week when he looked at his bed and said with a cracky voice,”there are bugs on my bed”.

When we arrived in the small village of Alto de Jesus Mac quickly became the focus of attention with the children. He quickly made friends and fit right in when he brought out his bag of Legos. I remember him sitting on the dirty ground playing along with the kids and then turning to me and saying,”Dad, I don’t know what they are saying!” It was pretty cool for me to sit down with him and his new friends and help them talk to each other. These new friends would become his partners in ministry and entertainment for the rest of the week. Two of his best friends were a brother and sister named Arnon and Rose. By the end of the week you would have thought that they had known each other forever.

Some of Mac’s favorite things about Panama were sleeping in a tent, playing all day with his new friends, feeding chickens, riding in the back of a truck, and telling other children about Jesus with his Evangecube. He ate great, loved the extreme part of the trip(except all of the hiking up hill), and hardly ever complained. He is filled with a sweet spirit and built for ministry. Mac is one of the best trip participants that we have ever had and the three of us are so glad that we have this experience of serving the Lord together to remember forever. Praise the Lord! Serving the Lord alongside of your family is one of the coolest things you could ever do.